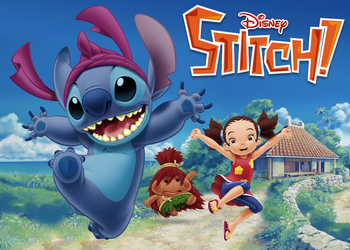 Stitch!note スティッチ! Suticchi!; also known as Yuna & Stitch in the German dub (yes, the exclamation mark is mandatory) is an anime series from Disney Channel Japan that serves as the second TV series in the Lilo & Stitch franchise. Three seasons and two post-series TV specials have been produced; the first two seasons—Stitch! and Stitch! ~The Mischievous Alien's Great Adventure~;note スティッチ! ～いたずらエイリアンの大冒険～ Suticchi! ~Itazura Eirian no Daibōken~ yes, with those tildes—were produced by Madhouse for a total of 54 episodes and two specials.note 25 episodes for the first season, 29 for the second season, and an after-season special each. Shin-Ei Animation produced the 29 episodenote and one after-season special third season—Stitch! ~Best Friends Forever~;note スティッチ! ～ずっと最高のトモダチ～ Suticchi! ~Zutto Saikō no Tomodachi~ tildes still included—as well as the post-series specials, which are known as the "Stitch! New Specials" series. It ran regularly from 2008 to 2011, while the TV specials—Stitch and the Planet of Sandnote スティッチと砂の惑星 Suticchi to Suna no Wakusei and Stitch! Perfect Memorynote スティッチ！パーフェクト・メモリー Suticchi! Pāfekuto Memorī; alternately titled in English as Stitch! A Perfect Memory—were broadcast in 2012 and 2015, respectively.

Yuna Kamihara is a young girl who lives on Izayoi, a tiny (fictional) island off the coast of Okinawa, with her father and grandmother. Much like Kaua'i in the original film and series, Izayoi is a tropical island full of pineapples, sugar cane, and hibiscus, all of which are native to both the Hawaiian and Ryukyu Islands. Yuna practices Karate every day with her friends down at a run-down old dojo, and considers herself to be a "protector" of sorts for the local kids. Her mother took off for parts unknown, and she worries for her father's safety. One day, while visiting the Spiritual Stone in the Chitama Forest, she sees an explosion in the distance, and reports start coming in of "blue monster" running amok in town.

Meanwhile, Stitch, who left Earth shortly after Lilo went to college and has since fallen off the wagon, is on the run from several Galactic Federation officials when he and Jumba are sucked into a Space Storm that deposits them outside Earth. Stitch, confused, hungry, and thirsty, then runs amok looking for food. He attracts the eye of the locals, who are rather fearful of him, but Yuna goes to confront him. After they square off in a pseudo-karate match, they bond and become friends.

While Yuna is taking Stitch back through the forest, he sees the Spiritual Stone. Yuna explains that the stone holds immense power and can grant any wish. Stitch wants to be the strongest thing in the galaxy, and so tries to wish on the stone only to get zapped. Yuna then explains that only those who do good deeds will have their wishes granted. Stitch then makes it his mission to do 43 good deeds to have his wish, to be the most powerful creature in the galaxy, granted. However, all of Stitch's old nemeses are on his heels...

Apart from being part of the same franchise with the same characters, it is not related to the pilot movie for Lilo & Stitch: The Series, which had the same name though followed by "The Movie". A heavily-edited "re-version" for the non-Japanese market, which includes the English dub, attempted to connect Stitch! to the film conclusion of Lilo & Stitch: The Series, Leroy & Stitch, in the first episode. This wasn't attempted in the original Japanese version until a third season episode brought her back for a brief reunion with her old friend. Due to this, it's often believed that the series was originally intended to be an Alternate Universe until they finally cemented it as a Stealth Sequel, possibly due to fan demand.

Three years after its initial debut in Japan, two years after it was first broadcast in English, and a few months after the last season ended in Japan, it aired in the United States on Disney XD in October 2011. However, it was pulled off the air less than a week later after only five episodes aired. The three seasons and two post-series specials have already been dubbednote barring one episode known as "Stitch Power" but have only aired in full outside of the U.S.

Stitch! has been succeeded in the franchise in 2017 by the Chinese animated series Stitch & Ai, which shares a similar premise with the anime.note Once again, Stitch is separated from Lilo, ends up in a different region of Earth, and becomes best friends with a young local girl over there in a Science Fantasy series involving creatures based on a region's mythology. But unlike the anime, Stitch & Ai had the assistance of American animators during production and was produced in English first before being dubbed into its local language.note Also, Stitch didn't deliberately leave Lilo this time around; he was kidnapped by a warring space faction.

In the Stitch! episode "Angel's Flight", Stitch and Angel are enjoying their time together, with Angel singing her siren song, "Acoota Chi-Meeto". Normally, her song doesn't affect Stitch the same way that it affects experiments made before her, but her developing head cold makes her beautiful singing voice become hoarse. Her changed voice somehow DOES affect Stitch, unintentionally brainwashing him to follow his evil destructive programming and go on a rampage around town on Izayoi Island. He only stops when Angel headbutts him, which knocks him out cold. "Love hurts" indeed, Pleakley.

Example of:
Brainwashed and Crazy

In the Stitch! episode "Angel's Flight", Stitch and Angel are enjoying their time together, with Angel singing her siren song, "Acoota Chi-Meeto". Normally, her song doesn't affect Stitch the same way that it affects experiments made before her, but her developing head cold makes her beautiful singing voice become hoarse. Her changed voice somehow DOES affect Stitch, unintentionally brainwashing him to follow his evil destructive programming and go on a rampage around town on Izayoi Island. He only stops when Angel headbutts him, which knocks him out cold. "Love hurts" indeed, Pleakley.