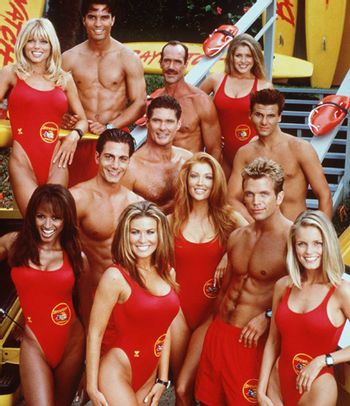 Oh yes, this is an article about Baywatch.

Baywatch was a long-running (1989-2001) American television series about a group of fictional ocean lifeguards note Baywatch is actually the name of the red and white rescue boat class that have been used by LA County lifeguards for many years. In the show, they were replaced with the yellow Scarab speedboats in the second season. But in real-life, the Baywatch rescue boats are still the primary rescue boats. A Rescue show with soap-operatic elements, mixed with action, romance, domestic drama, occasionally crime, and the ever-present PG-rated Fanservice into an hour of "wish you were here" beautiful Southern California (for the first 9 seasons) and Hawai'i (last 2 seasons) locales. The show was created by Douglas Schwartz, Michael Berk and Gregory Bonann, the latter of whom was a real-life Los Angeles County lifeguard: the basic premise and the storylines of many episodes were often based on rescues he and his colleagues had made.

On 23 April 1989, the Pilot Movie Baywatch: Panic at Malibu Pier aired on NBC. However, Baywatch was cancelled by NBC after its initial season (1989-90) on network television. The co-creators and lead actor David Hasselhoff bought back the rights to make more episodes for a mere $100. Hasselhoff’s stardom in Germany at the time (due to Knight Rider, as well as his singing career) brought the producers $300,000 in advance for every episode. The show's setting also provided ample opportunity for Product Placement of swimwear, sportswear and motor vehicles. Independently financed, the show went into its second season (1991-92) in first-run syndication and proved to be insanely popular, particularly overseas: and as America's top television export in the 1990s, Baywatch was seen in 140 countries by over one billion viewers each week, as estimated by Guinness Book of World Records. The show's amazing international popularity led Entertainment Weekly to proclaim Baywatch as "The Most Popular Television Series in the History of the Planet" in an October 1993 cover story.

And to count the number of Playboy Playmates of the Month it either launched or had cast would take more time than it's worth. The most notable cast alumnus (apart from Hasselhoff) is Pamela Anderson, who starred as lifeguard C.J. Parker from the start of the third season to the end of the seventh season. In 1995, at the height of its popularity, it got a far less successful spinoff, Baywatch Nights. By the ninth season, as Baywatch had begun to wane in popularity, the show moved to Hawai'i, much due to lower costs and favorable tax breaks for the production company. The series was also renamed Baywatch: Hawaii. In 2003, a Made-for-TV Movie, Baywatch: Hawaiian Wedding was released which was essentially a Reunion Movie with many former cast alumni returning as their characters.

Although some people may argue that the show was already a parody of itself, Baywatch has been parodied quite a lot. Most of its parodies boiled down to the slow motion scenes, the bounce, and the inconsistent acting. While most parodies were one-shots in other series, one series was a dedicated parody: Son of the Beach.

Allison Pregler has taken on the, in her own words, "Largely thankless task" of recapping and riffing on every episode of the show with her series Baywatching. She's currently covering season 6, with Baywatch Nights crossing over alongside this and season 7.

The entire series was remastered and released in 2019, bouncing between Amazon Prime and Hulu.

(Reluctant) beach patrol officer Garner fails to catch two misbehaving teens and vents his fury in the shower. Despite Mitch trying to be optimistic, Garner's anger turns to him.

(Reluctant) beach patrol officer Garner fails to catch two misbehaving teens and vents his fury in the shower. Despite Mitch trying to be optimistic, Garner's anger turns to him.