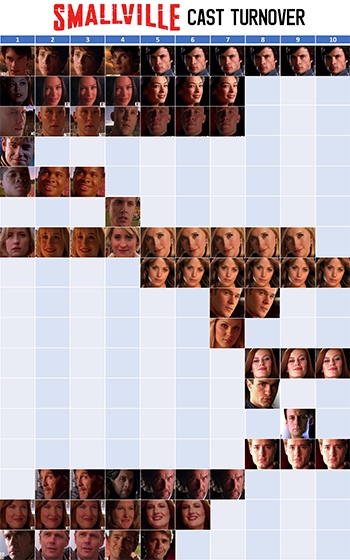 Hey, it should all be fine as long as they keep the big guy.
Hail to the Long Runner, the show that stands the test of time. But not all Long Runners pass that test unscathed. Actors die, or get fired, or lose a contract dispute, or retire, or simply don't want to play the same role for the rest of their foreseeable career, or are concerned about being Typecast, or don't want to deal with the coworkers of that series anymore. But creators and executives don't want to let their Cash-Cow Franchise or treasured premise go so easily. Therefore, simply bring up new blood and keep going. Sometimes you could argue that a show achieved Long Runner status because it was willing to adapt instead of rolling over and dying when somebody quits.
Advertisement:

But the point is, sometimes you get shows where the main cast later on is completely different from the original. That is the basis of this trope. There's also the numerous cases of animated series whose dubbing cast changes due to a Channel Hop or an export-stoppage being overturned. Nearly all of the above can apply to characters in Literature and other works without human actors if the series spans enough time In-Universe and/or has a high turnover.

To qualify for this, a significant percentage of the work's main cast, including recurring, named supporting cast, has to change. Red Shirts, extras, and guest stars don't count. A one-man show only needs the one person to change, but that won't cut it for an Ensemble Cast. Essentially, either Suspiciously Similar Substitute or The Other Darrin, en masse. (Though it can be spread out over time; it's a Long Runner, after all.)

Having a lot of turnover is by itself a neutral phenomenon, but for many people, it's a cause to believe a show has Jumped the Shark, is Ruined FOREVER or is a Franchise Zombie, especially if the departing cast were a main reason for the show's appeal to them. Conversely, the incoming cast may find themselves working for only one season anyway.

Aversions of this Trope in music are covered under Long-Runner Line-up. In-universe (or in Real Life), it's High Turnover Rate.