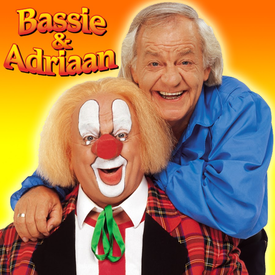 Hugely popular Dutch children's duo who have been active since 1978. "Bassie" (played by Bas van Toor) is a naïve, but jolly clown who always cracks jokes. "Adriaan" (played by Aad van Toor) is the more intelligent, serious but nevertheless also happy-go-lucky acrobat.

In real life, the actors are brothers who for more than 20 years had great success as an acrobat duo named “De Crocksons”. Near the end of the 1970s they started making TV series for children. First with help of Dutch TV producer Joop van den Ende, but later (after their cooperation with Van Den Ende ended because of an argument) they started producing and directing the series themselves. Most series feature treasure hunting or other traveling adventures which took them to exotic locations. They are often spied and shadowed by a group of stupid crooks. Several villains made their appearance over the course of the series, the most famous ones being a crime lord named “De Baron” and his henchmen "Vlugge Japie" and “B2”.

The franchise was a huge Cash Cow Franchise in both the Netherlands and Belgium and was also sold to other countries like France and China. Besides the TV series, several music records, comic strips, radio dramas, short series, theater shows, etc. were made and since the actors kept all the marketing and merchandising rights they became rich. Since 1994 no new shows with both characters have been made, but due to frequent repeats, media appearances and parodies of Bassie and Adriaan remain popular and famous. After Aad retired, Bas van Toor went solo and released two more series of his own.

The series (and the translated titels):