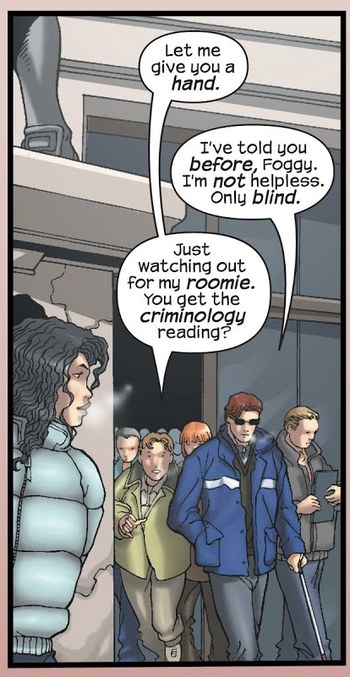 Poor Foggy. He doesn't suspect a thing...
Spagna (cutting Pelswick's food): There! All done!
Pelswick: Thanks for doing that, but it's my legs that don't work, not my teeth.
— Pelswick, "Hear No Evil, P.C. No Evil"
Advertisement:

When some people meet a person with a disability, they automatically assume that the individual is totally incapable of looking after themselves, and treat them as such. Most egregiously, some people even assume that having one disability equals having every disability! These people are the ones who insist on SHOUTING AT THE BLIND, assuming they can't hear, either. These patronizing attitudes often create resentment on the part of people with disabilities.

In fiction, they have little problem telling the offender exactly that.

Learning this is not true is often the point of a Very Special Episode. Contrast this trope to the Handicapped Badass, who everyone can instantly tell is not to be messed with.