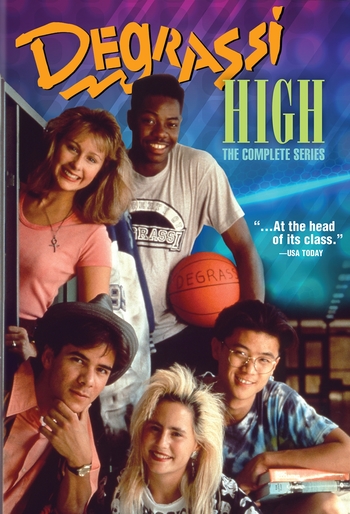 Everybody can succeed, in yourself you must believe!
Advertisement:

The immediate sequel to Degrassi Junior High, and the show that solidly transformed the Degrassi series into a full Soap Opera. This series lasted from November, 1989 to January, 1991. A total of 28 episodes in two seasons.

Most of the episodes focused on the day-to-day problems of being a teen, such as bargaining for more freedom from your parents, preparing for life after graduation, and (especially) the perils and pitfalls of No Going Steady. Every few episodes, a monster problem would hit, like AIDS, a kid running away from home, and so on. However, the cast were such a Dysfunction Junction that the day-to-day episodes could feel almost as soap-opera and dramatic as the heavy-hitter ones. Without exception, every single storyline had a follow-up later.

Like the rest of the Degrassi franchise, the series was intended as a tool for teaching teens about "hot-button" issues like abortion and AIDS. In many ways, it serves as a bridge between the individual episode focus of Degrassi Junior High and the sprawling Soap Opera of Degrassi: The Next Generation. But in spite of that, it was far more continuity-heavy than Degrassi: The Next Generation, with its Three Month Rule and Heel–Face Revolving Door.

At its best, Degrassi High turned a large cast into True Companions with a bond so real you could taste it, and a school that felt more real than almost any other on TV. It still has a ton of die-hard fans who love it like Star Trek fans love their continuity. At its worst, it could be frustrating stew of too many Spear Carrier characters and repetitive romantic subplots, made worse by regular Retcon. The most striking innovation of the show was that all characters had Soap Opera adventures even when the camera wasn't on them, and time visibly passed each episode — which made everything fit together, but also meant a ton of Second-Hand Storytelling.

The series ended with a Grand Finale movie, School's Out, which caused an outcry by going Darker and Edgier than anything Degrassi (or almost any other teen show) had done at the time, with tons of Fanservice (from actors who were real teenagers), drugs and alcohol, sex scenes, and characters turning very unpleasant (themes that teen dramas would later be DEFINED by, mind you). Most notable was using real cursing in a show that had never had it before — one foul-mouthed line became an instant Memetic Mutation. Like many Darker and Edgier shows, fans tend to either love it or hate it. (Of course, compared to Degrassi: The Next Generation it feels almost quaint in a lot of ways — and yet, still Darker and Edgier in others.)

The series was followed up with Degrassi Talks, a documentary special where Degrassi actors interviewed people for real stories of drug addiction, domestic abuse, etc. interspersed with relevant clips from the show.