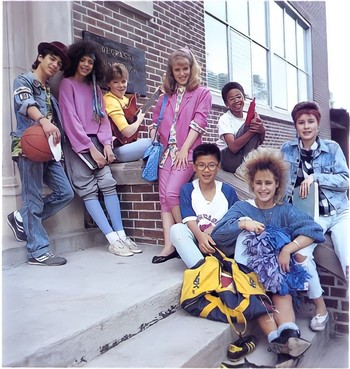 "I've often tried to figure out why I liked it so much. I thought it might have been due to all the teenage girls with pert breasts and cute accents ("what are you talking aboot?" was a fave-rave thing for some time), but in the end, I think it had something to do with high school in general, a time that - until Clerks took off - I assumed were the the best years of my life. The show calls to mind an era when one's largest crises were wondering when you were finally going to get to third with a girl, or the possibility of a shitty grade in gym."
—Kevin Smith, 1996

The second series in the Degrassi franchise (third if you count the half-hour film Ida Makes a Movie as freestanding, as it originally had been intended), and the one that put Degrassi on the map for good. It re-used some of the actors from The Kids of Degrassi Street, but playing different characters. The series lasted from January 1987 to March 1989 with a total of 42 episodes in three seasons. There is a reason Degrassi: The Next Generation has "Next Generation" in the title!

The series was created by CBC as an educational tool for teens, to teach them about "hot button" topics like eating disorders, teen pregnancy, losing parents, etc. Most episodes followed a fairly standard formula: one of the kids has A Day in the Limelight where they deal with some nightmarish problem. At the same time, another kid has a comic adventure that mirrors the main A plot (Two Lines, No Waiting). At the same time, several arc plots floated around the show, and each episode would move the arc forward a bit (often serving as Foreshadowing for the A and B plots of later episodes).

Described like that, it sounds like a crappy Very Special Episode. What made it more than that was the willingness to (sometimes) have unhappy endings, and for the consequences to last more than an episode — when a character fails a grade, the whole next season shows then struggling with the stigma.

While the show featured a recognizable ensemble cast, it wasn't fixed and would rotate every episode. It is not uncommon to see a major character as a glorified extra in the background if they aren't the main focus of the episode, and a minor extra in the background get A Day in the Limelight, or become a major character later. Some of the show's biggest, or most iconic characters include fedora-wearing Joey Jeremiah (Pat Mastroianni), spiky-haired teen mom punk Christine "Spike" Nelson (Amanda Stepto), passionate activist Caitlin Ryan (Stacie Mistysyn), Gentle Giant and future Degrassi principal Archie "Snake" Simpson (Stefan Brogren), and bespectacled, wangsty Derek "Wheels" Wheeler (Neil Hope).

When it first aired, the show was ground-breaking for dealing with these hot topics without censorship or neat happy endings; it became a cult hit in America via PBS. It eschewed parents always being right for parents sometimes being quite unsympathetic, bigoted and abusive (and at one point dying), it introduced the first primetime TV depiction of Teen Pregnancy (and the treatment that said teenager received by adults), it portrayed an interracial couple where not even American television 5-10 years later would and even featured the utterance of the N-word to depict racism. Most notably, it mostly avoided the Dawson Casting trend that would become par for the course with the teen drama genre, with the majority of the characters being played by legitimate teens. Not only that, but even the haughtiest would end up breaking at some point, with Alpha Bitch Stephanie Kaye becoming suicidal, and The Bully Dwayne Myers getting HIV in the sequel series. This is a far cry from Next Generation, who features the indestructible Paige Michalchuk.

By today's standards of course, with how far teen dramas (largely influenced by this show and its successors) have pushed the envelope especially in the post-Beverly Hills 90210 era, Degrassi Junior High could very well radiate "Seinfeld" Is Unfunny to a modern audience. Its raw, gritty filming style, as well as its cast consisting of real late 1980s Toronto teenagers instead of experienced actors, makes it resemble the very after-school specials the show was partially rebelling against. However, the show has remained a cult favorite, including with Degrassi: The Next Generation fans interested in Degrassi's origins.

There are also persistent rumors that Aaron Spelling attempted to buy the rights to the show to adapt it for American audiences but was refused, so he created Beverly Hills, 90210 instead. These rumors have never been confirmed outright, but it is plausible to compare 90210's first season to Degrassi as it was very issue-based and episodic (and even possibly nicked some plotlines from this show).

It is also worth noting that the character Christine "Spike" Nelson (played by Amanda Stepto) would gain unsung popularity in the mid-late 2010s in the vaporwave and TikTok communities, as it is her voice saying "I'm just a kid...it was just a little mistake."

The most notable American fan was one Kevin Smith, who later achieved his life's dream of romancing the character Caitlin (whom he named Caitlin Bree in Clerks after) in the later series. Another American fan was Albert of The Agony Booth, who planned to recap every DJH episode, but stopped after the first episode of season 2 back in 2010

. However, another guy has taken it upon himself to review the entire show here

, in a much more Caustic Critic tone.

The series was immediately followed by the sequel series Degrassi High.