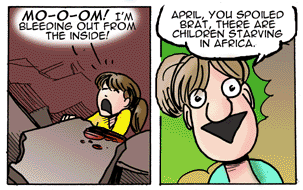 You ought to be grateful that you get to die with a full stomach!
"Who has time to learn logical fallacies? Don't you know children are starving in Africa?"
Advertisement:

Arguing that expressing concern about a (relatively) small problem means that the person doesn't care about any larger problems. The fallacy can be thought of as a combination of False Dichotomy, Strawman and Red Herring, taking the opponent's claim and appends to it the following additional claims:

The intent is to distort the opponent's claim "X" into "X, which is far more important than anything else."

A related issue is the airgap problem. No matter how much worse someone else's pain is, you can only feel your own. Your paper cut isn't objectively as painful as someone else's broken leg — but you don't feel any pain from their leg, while your own paper cut stings you like the dickens. (For that matter, their broken leg isn't as painful as the pain of someone else who's being tortured to death; but they still have an airgap. Their broken leg is agonizing to them, but they don't feel the other person's torture at all.)

Finally, there's the issue that people have different pain tolerances. One woman might be kind of bummed by a miscarriage; another might be depressed for months; a third might go permanently mad from grief. A "First World problem" for one person might be honestly devastating for another.

The argument is logically hypocritical. 'People complaining about minor problems' is a minor problem, so if you use this argument to complain about such people...

Note that it is not a case of this fallacy when someone must prioritize between addressing two different problems. A doctor choosing to treat a cancer patient before a case of the flu is of course not the victim of this fallacy; the fallacy would be arguing that nobody should treat flu patients at all until there is a cure for cancer.

Simply comparing the severity of two problems is also not a case of this fallacy. If Bob complains about his flu, and Alice tells him "It could be worse, you could have cancer" she is not committing a fallacy; if she tells him that he has no right to complain about his flu when people are dying of cancer, she might be.

A type of False Dichotomy, and close cousin of Appeal to Pity. Often invoked in Misery Poker. See also, Wants a Prize for Basic Decency. Overlaps with a specific type of Tu Quoque fallacy called Whataboutism, which uses the same logic (you make point A, but what about B?) but is used to deflect criticism of a group from sources external to that group by pointing to a perceived equal or worse thing that the speaker's group does.