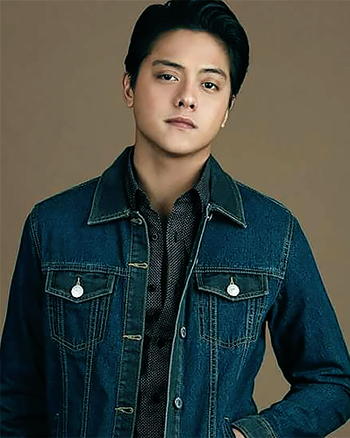 Daniel John Ford Padilla (born April 26, 1995 in Manila, Philippines) is a Filipino actor and recording artist of Filipinonote specifically Waray, Ilocano, Bicolano, and Tagalog and White descent. He belongs to the famous Padilla clan of the Philippines, practically a show-business equivalent of Blue Blood. He is the most successful celebrity among the Padillas’ third generation by a long shot. His mother, the half-White American and half-Filipino Karla Estrada (born Carla Ford), is also an actress. Padilla is fluent in Waray, as well as Tagalog and English.

He first caught Philippine audiences’ attention when he was brought in as a temporary replacement for Kathryn Bernardo’s “love team” partner in the teen show Growing Up (2010).explanation “Love teams” in the Philippines are two actors in the Philippines who are paired up as Love Interests in a work. They are almost always male and female, but in recent years, a few same-gender love teams have popped up. Love teams are expected to work together in more than one project, unless the masses unanimously decide they don’t click as an onscreen pair. There’s also some pressure for people in a love team to get together in real life, although this is considerably less common for older actors (who are normally already married or otherwise attached). Shifting paradigms in Philippine society have also significantly reduced the expectations that two actors in a love team should get together in real life, with more and more people realizing it’s just “promo” for their projects, and more and more actors feeling free to break out of their successful love teams. A notable recent example is Maine Mendoza aka “Yaya Dub,” who was one-half of the extremely popular AlDub love team. Amid the public and their network pushing Mendoza and her onscreen partner, Alden Richards, to at least pretend they’re dating, it eventually could not be denied that her real boyfriend was another guy — Arjo Atayde. Padilla was later cast to play a Romantic Runner-Up in Princess and I (2012), but the KathNiel fandom proved so formidable that the teleserye’s conclusion was rewritten so that Bernardo’s character Mikay Maghirang would end up with Padilla’s, Gino dela Rosa.

He’s known for keeping the legacy of magnetic Padilla “bad boy” charms alive. However, unlike his father Rommel, uncle Robin, and aunt BB Gandangharinote (who later came out as a trans woman and shed her swaggering macho image), who were all known as action stars, Daniel Padilla’s bread-and-butter has always been romance. In what could be seen as a reflection of changing times, Padilla’s niche was quickly established as the Troubled, but Cute bad boy with a prominent soft side — masculine and exciting, but sensitive and approachable. Probably best summarized by his 2013 ad campaign for the snack brand Oishi, titled #MedyoBadBoy

(roughly translated as “slightly/somewhat a bad boy” in English).

A Teen Idol of monumental proportions, Padilla was the first-ever Filipino to beat out international competition as “Global Slime Star” at Nickelodeon’s Kids’ Choice Awards in 2015. His film and TV career as “Teen King” was inarguably profitable yet polarizing, as well as his Idol Singer endeavors; public opinion has generally been much kinder as he entered his twenties, however, with Padilla earning secure respect as a household name. Padilla and Bernardo’s final (for now) offering as an onscreen couple, The Hows of Us (2018), was the highest-grossing Filipino film in history until Bernardo’s Hello, Love, Goodbye broke the record sans Padilla. Despite no longer featuring in projects together, Bernardo and Padilla are still officially dating, and apparently have been since 2012. They made a return as an onscreen couple in The House Arrest of Us (2020) — no relation to the 2018 film. The show was one of ABS-CBN's most successful releases in 2020.

Padilla also garnered praise for his performance in 2021's Kun Maupay Man It Panahon (English: Whether the Weather is Fine), a disaster drama film about 2013's Super Typhoon Haiyan, set in Tacloban (his mother's hometown, where Padilla briefly lived as a child). It also marks his first time speaking in the Waray language onscreen.