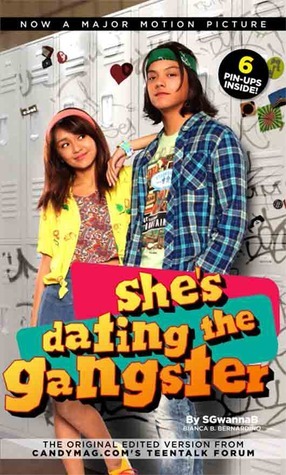 She's Dating the Gangster is a 2014 Philippine teen romantic comedy-drama film based on a bestselling novel of the same name by Bianca Bernardino.note It was originally published on the adolescent-oriented Candy magazine's website (which, incidentally, lives on despite Candy being no longer in print as of early 2017). Summit Media, Candy's publisher, began selling print copies of hit online stories (most originating from Wattpad and professionally tweaked for polish) at the height of their popularity among youth.

Athena Dizon (Kathryn Bernardo) plays a trick on campus heartthrob and bad-boy gangster, Kenji de los Reyes (Daniel Padilla). He sets up an arrangement for them to pose as lovers to make his ex jealous. They find themselves falling for each other yet falling apart.

The movie alternates between the 1980s and the present, following another pair portrayed by Bernardo and Padilla: Bernardo plays Kelay Dizon, Athena's niece, and Padilla plays Kenneth, Kenji's son. No, Kelay and Kenneth are not related. Yes....