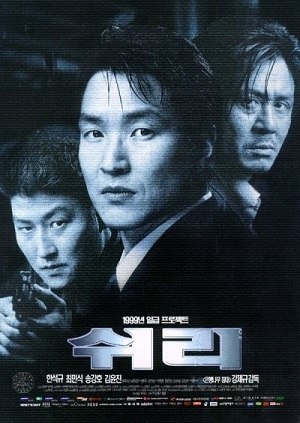 "You know the fish named Shiri? It's a [native Korean] fish, living in crystal streams. Though they're separated with the country divided, someday they'll reunite in the same stream."
— Park Mu-young given a partial "The Reason You Suck" Speech to Yu Jong-won on the theme of Korean unification.
Advertisement:

Shiri (or Swiri in Korean) is a 1999 South Korean action/drama movie directed by Kang Je-gyu, which was the first movie as a tribute to action movies made in Asia, America and Europe as part of a new wave of Korean films. With a budget of USD$8,500,000 at the time, it was considered by critics to be one of the most expensive movies made in Korea. It starred Han Suk-kyu, Song Kang-ho, Choi Min-sik and Yunjin Kim. The success of the movie would serve as the basis for the Korean spy drama Iris.

Released in theaters in Korea, it was soon released overseas in an effort to gain an international audience. It was later released in DVD in the late 1990s and early to mid 2000s. A high definition was released and was aired in South Korea by KBS, but it was never released for the overseas market.

In 1992, the Korean People's Army recruited a promising soldier named Lee Bang-Hee, who was then trained by the Ground Force's elite 8th Special Forces Unit. She gets deployed covertly to South Korea, where she plays a key role by using her special forces training to take out several prominent South Korean scientists, defense officials and politicians throughout the mid 1990s. Operation Center, hot on her tail, investigated a promising lead in 1996 before the trail went cold.

In 1998, OP gets a lead when a CI, who turns to be an arms dealer, was assassinated by a mysterious sniper. South Korean law enforcement confirms that Bang-Hee has resurfaced under orders from Pyongyang. OP agents Yu Jong-won and Lee Jang-gil investigate the CI's death as their first major case in years. But as they continue, the two agents get wind of a plot by renegade North Korean commandos led by Park Mu-young, a seasoned North Korean commando and officer in the same unit Hee is in, being involved in a terror plot to take out North and South Korean politicians in a North/South Korean soccer friendship game by using a prototype liquid bomb called CTX.