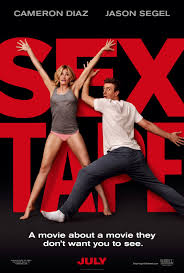 They do about as good a job hiding the tape as they are with this logo.
Advertisement:

The story follows Jay and Annie, a married couple who, prior to marriage, had a ridiculously experimental sex life, from their university days to present. However, once marriage came into the picture the spark apparently dissipated, and Annie's suggestion to film themselves performing every move from The Joy Of Sex comes into play. While it revives their libidos, Jay's unfortunate error in not deleting the video causes it to be synced to every refurbished Apple iPad that he's provided to friends and acquaintances courtesy of his job as a radio DJ, and the duo have to figure a way to wrangle back each and every tablet before it's discovered. Hilarity Ensues.