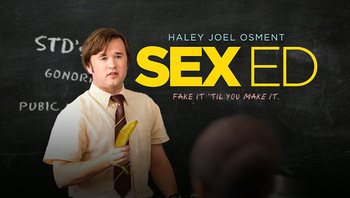 Sex Ed is a 2014 Sex Comedy starring Haley Joel Osment as Mr. Cole, an underemployed Education graduate working in a bagel cafe while searching for teaching jobs. Eventually, he stumbles on a part-time job as an after school program supervisor at a secondary school in Tampa, Florida. After realizing that his students are struggling with puberty and desperately lacking an understanding of their own bodies or development, he begins instituting sex education lessons in his classroom, assisted by his roommate and his roommate's girlfriend. However, his efforts are complicated both by his virginity and by tense relations with his students' families: including a stern, conservatively religious Papa Wolf and the aggressive, tough guy boyfriend of a student's sister after Mr. Cole develops a mutual infatuation with the sister. While the film contains no small amount of Cringe Comedy due to the subject matter, all of the characters are nevertheless portrayed with a level of understanding and dignity usually avoided in the genre.