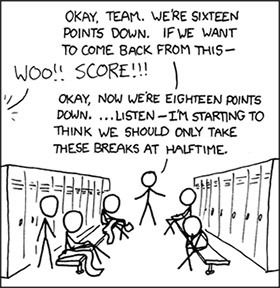 "We few, we happy few, we band of brothers;
For he to-day that sheds his blood with me
Shall be my brother; be he ne'er so vile,
This day shall gentle his condition:
And gentlemen in England now a-bed
Shall think themselves accursed they were not here,
And hold their manhoods cheap whiles any speaks
That fought with us upon Saint Crispin's day!"
— King Henry V, Act 4 Scene iii, by William Shakespeare, giving us the Trope Codifier

La Résistance is about to be crushed by The Empire. The Ragtag Bunch of Misfits sports team is way behind at halftime. The Dork Horse Candidate has just seen their opponent make a strong point in the political debate, to enthusiastic applause. The opposing attorney in the courtroom drama has just made their argument with laser-like precision. The MacGuffin was seized by the Mooks, and the team sees no way to recover it or succeed without it.

In short, everything looks hopelessly lost.

And this is when the hero will step forward and make a pithy speech including at least one noteworthy One-Liner (similar to a "Facing the Bullets" One-Liner), to the effect of (or the specific phrase) "It's time to take the fight to them," (often followed by a One-Liner Echo or a Dramatic Gun Cock). This sometimes happens right after a sidekick has joined the choir invisible via a Heroic Sacrifice. Sometimes the characters are going Give Me Liberty or Give Me Death!.

In TV and movies, there's no situation so desperate that it can't be turned completely around with a brilliant one-minute rant. This speech means that the heroes are going to (finally) move to a proactive posture, despite the overwhelming odds and very real chance that they'll all end up dead.

The background music usually swells to a rousing, if not outright majestic climax as the hero drives his point home. The Slow Clap or other ovation followup is practically essential, followed by a Misfit Mobilization Moment (or a Miracle Rally for sports-based works). But if a Grand Finale does not result, the whole thing will often backfire leaving the heroes badly battered. A Sedgwick Speech often looks like one of these at the beginning. When it's the whole damn human race that's getting the Rousing Speech, that's Last Stand. When the Rousing Speech is delivered by the leader of a nation or world, it is an example of Emergency Presidential Address.

Usually, it's the leader of the heroes who delivers the Rousing Speech signaling this transition, but a common variation is to have whichever character is typically most cautious (even cowardly) deliver it.

Because of the sheer volume of memorable Real Life Rousing Speeches that exist, please do not add them to this page, add them to the Quotes page.

Tilly encourages her father and all of Big City to not back down and stand up for what's true to them.

Alternative Title(s): Never Give Up Speech

Tilly encourages her father and all of Big City to not back down and stand up for what's true to them.