Literature / The Ballad of the White Horse 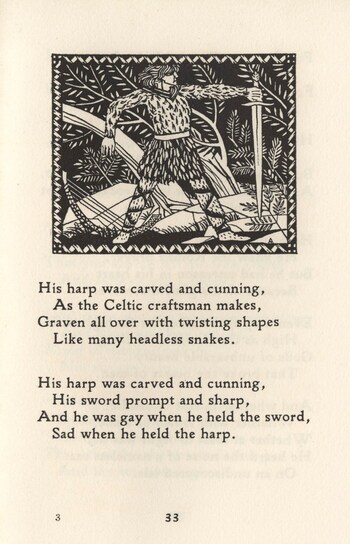 Woodcuts by Robert Austin
Before the gods that made the gods,
Had seen their sunrise pass,
The White Horse of the White Horse Vale
Was cut out of the grass
— Opening Lines
Advertisement:

The Ballad of the White Horse is a 1911 epic poem by G. K. Chesterton that follows King Alfred the Great as he rallies chieftains from all around England to defeat the invading army of Guthrum the Dane. It’s generally considered to be one of the last traditional epic poems written in the English language.

The title refers to the Uffington White Horse, a figure carved into a hill over 3000 years ago depicting a rearing horse. Throughout the book, the Uffington Horse is metaphorical of civilized England. Under the rule of the pagan vikings, it became overrun with weeds and grass, whereas under Alfred's rule, it is tended to and kept clear. This is also used to illustrate how constant work and vigilance must be maintained to keep anarchy at bay.