Literature / The Club of Queer Trades 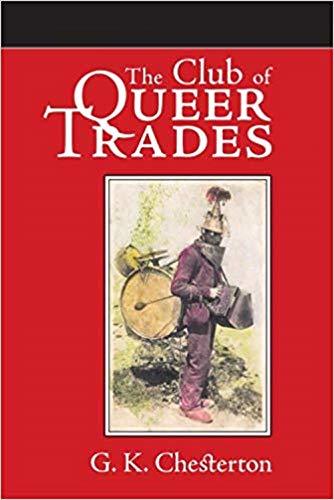 A collection of short mystery stories by G. K. Chesterton, affectionately filleting Chesterton's beloved mystery genre. Rupert Grant is a jack-of-all-trades turned private detective. His brother, Basil, is an eccentric retired judge. They Fight Crime!. Or, rather, Rupert tries to fight crime, and Basil shows how the mystery isn't actually at all criminal.

Each encounter sees Rupert and Basil (and their narrator) discovering a new and peculiar means by which someone earns a living, and eventually meet the Weird Trade Union for these entrepreneurs - the eponymous Club of Queer Trades. This club has a single condition for membership: that each member must have invented an entirely new trade by which to earn his living. This is further elaborated in the club's two rules: First, the trade must be entirely novel, not a mere variation on an existing one (i.e. an insurance agent who insured people's pants against getting ripped up by dogs instead of insuring their houses against catching fire would not be eligible). Second, the trade must be a genuine source of income, the support of its inventor (i.e. a man who spent his days collecting empty soda bottles would not be eligible unless he could somehow make a livable income out of doing so.)

Beware, the spoilers explain the plot of some stories:

Stories in this collection: