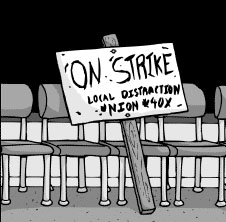 Shrek: That's okay buddy. We're from the union.
Elf: The union?
Shrek: We represent the workers in all magical industries, both evil and benign.
Elf: Oh, oh right.
Shrek: Are you feeling at all degraded or oppressed?
Elf: [turns off microphone] Uh, a little...we don't even have dental.
— Shrek 2
Advertisement:

Most aspects of major American narrative entertainment features ("movies") and series ("TV shows") are unionized.note As the careful qualifications should indicate, there are all kinds of exceptions, both in the US and around the world. Thus, writers and directors for such series and features are more familiar with the goings-on of union negotiations and politics than the average person. As a reference to the ubiquitous nature of unions in their lives, they will invent unions for unlikely occupations as throwaway gags or plot points. Much as TV Tropes expanded from TV, the joke has spread into writing professions where fewer (or no) unions exist.

This is not nearly as much Truth in Television as one might think, particularly in the United States but also internationally. As seen on the other wiki,

Sweden is one of the relatively few countries with a majority union workforce; Great Britain did have one before the Margaret Thatcher years, and Canada has a workforce more than a quarter unionized. At the apex of the movement in the 1950s, nearly a third of America's workers were unionized, but nowadays that number has dwindled to less than an eighth (and is dropping quickly), relegated mostly to the few remaining states with pro-union laws on the books (California and New York happen to be among them), legacy automobile plants, and the public sector (this one may change very soon).

The concept of a super-villain union is a humorous one on several levels. One, villainy is by nature a solitary and selfish activity. Two, villains don't care about rules. And three, * This entry has been stricken under Wiki Contributor Local 303 Bylaws, Section 440 Sub 13 Para 2.* The shop steward will permit entries below, subject to the provision that management does not impose a lockout.

A Thieves' Guild, Adventure Guild, or Murder, Inc. is a specific type of weird trade union, though they usually are a bigger piece of the story than most of the examples here. A Band of Brothels is one for ladies of... negotiable affection. A Magical Society may be one, although those don't necessarily exist for the benefit of their members. See also Signed Up for the Dental.

In any case, the very notion of a union for people who are engaged in illegal activities is frequently played for (at least mild) laughs.