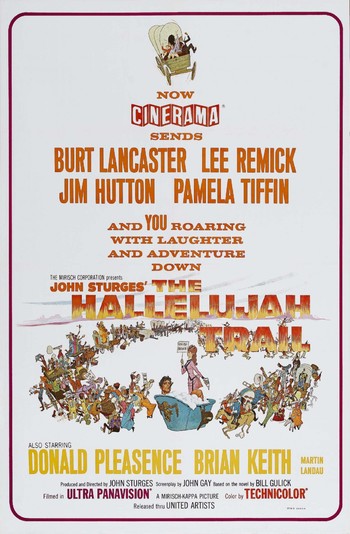 "Buffalo were feeding ravenously. Beaver were damming and storing with strange vigor. Horses and dogs were becoming shaggy-haired as never before. And it could be sensed in the booming, bustling mining town of Denver. Most historians agree that the events leading to the Battle of Whiskey Hills and the subsequent disaster at Quicksand Bottoms began here in Denver at a miners' meeting..."
Advertisement:

Before A Million Ways to Die in the West... before Blazing Saddles... even before Support Your Local Sheriff... there was The Hallelujah Trail.

The year is 1867, and the mining town of Denver is facing a crisis: All the signs are pointing to the coming winter being long, and hard, and they are running out of whiskey! Hoping to resupply before the winter snows make it impossible, the town saloon owners pool their resources to bring in one last wagon train loaded with booze.

The wagon train immediately draws the attention of every Indian within hundreds of miles, as well as the Women's Temperance League. A cavalry troop is dispatched to protect the wagon train. Temperance leader Mrs. Cora Massingale inspires a band of women to set out to intercept the wagon train and destroy its cargo. A second troop of cavalry is dispatched to protect the women. The Denver Miners' Militia is formed to go out and meet up with the wagon train, and protect it from the Indians, and the women. A group of wagons, driven by members of the Irish Teamsters' Union, breaks away from the main train, until their labor demands can be met.

All these groups come together in the middle a blinding sandstorm, and Hilarity Ensues.

Interestingly enough, this 1965 laugh riot was directed by John Sturges, the man who gave us The Magnificent Seven and The Great Escape. And, like those films, it features a music score by Elmer Bernstein. The cast includes Burt Lancaster, Lee Remick, Jim Hutton, Pamela Tiffin, Donald Pleasence, Brian Keith, and Martin Landau.