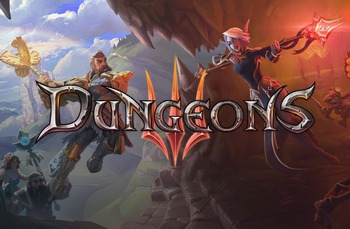 The Prime Evil has returned! And this time, with an help on the inside...

The sequel of Dungeons 2 and the third chapter of the Dungeons game series by Realforge Studios, published by Kalypso and released in October 2017, built on the second one, featuring a different dungeon system based on all the three factions of the previous games and a brand new campaign of 20 scenarios.

The story picks up when Dungeons 2 ended: The Ultimate, Chaotic and Corrupting Evil set aside their differences, joined forces and combined to give birth once again to the Prime Evil. The combined forces of the Horde, the Demons and the Undead crushed the leftovers of the Alliance, defeated Meltysand's cult of the Red God and conquered the land. Victory was his, at last, but soon enough, the Prime Evil slowly fell into a spiral of depression and angst... with no enemy to fight and no challenge to accept, the Bored Evil locked himself into his private laboratories for a long time... before figuring out that since he was in a sequel, there had to be a new land to explore! And so the Conquest-Hungry Evil sets his eyes on a distant eastern continent, ready to be plundered. However, the invasion ends in an embarassing failure when the fleet built by the Prime Evil's servants sinks mere meters away from the coastline, forcing the Exasperated Evil to change his plans and send his people-possessing Shadow abroad. On the new continent, the Shadow spots Thalya, a Dark Elf sorceress raised by the paladin of the Empire Tanos as a good person, and decides that she could be the perfect vessel for his evilness. With the help of Thalya, the Dungeonhearts and his new combined forces of evil, the Renewed Evil faces the armies of Tanos and the other Imperial heroes in this new land.

As mentioned above, the gameplay is based upon the second game's one, this time taking even more hints from Dungeon Keeper (which is actually lampshaded), but instead of using a single faction with peculiar needs and gimmicks you have access to all the three factions (Horde, Demons and Undead), each specialized in his own gimmick (Horde forge traps and training, Demons deals with Mana and research, Undead deals with reviving, prisons and magic toolboxes). The Dungeonheart is back, as well as Neutral Buildings to deal with treasury, toolboxes and food for the creatures. Furthermore, unlike its previous title Dungeons 3 has a truly random casual game mod, allowing you to play into a ranfomly-generated world (well, Underworld) each time. Oh, also the Narrator from the second game makes a return in his usual role.

Like the second game, it received a series of DLC Campaigns introducing minor extra gameplay mechanics, such as the possibility of creating Outposts in the Overworld, Heroes establishing bases in the Underworld and expanding infestations of enemies. Also, the night/day cycle which was present only in a single mission was implemented into normal gameplay.

For the Characters, go here.