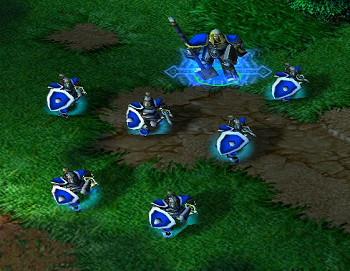 It's the one twice the height of everyone else.
Advertisement:

A Hero Unit is a unit, usually in a Real-Time Strategy game, that represents the Player Character, or a major character in the game's story, on the battlefield.

Hero Units are usually larger than basic units (sometimes inexplicably so), and more powerful than the basic infantry unit of the same type or species. They may be capable of one-shotting the basic infantry unit, and can take scores of hits before you need to consider healing them. Many of them have spells, weapons, or abilities than can hamper, if not obliterate, entire platoons of enemy units, and often have "Auras" that can confer buffs to any friendly unit near them.

But their special power does come with a price. In Single-player campaigns, completion of the mission is often dependent on their survival; if you lose them, Game Over, man! Even if their deaths don't result in instant failure, the loss of their power and enhancements will most likely swing the battle in the enemy's favor. In strategy games, every faction may have its own hero unit, and eliminating it will eliminate or convert all their other units and buildings.

It's notable that the proliferation of this unit helped create the Multiplayer Online Battle Arena genre.