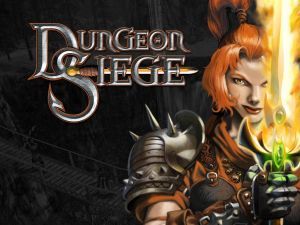 An Action RPG series created by Chris Taylor and developed by Gas Powered Games. What sets it apart from the others is its unique ability to let you the player specialize in whichever class you want rather than choosing preselected classes and going with them. The four classes are: Fighter, Ranger (archer,) Nature Mage (mostly defensive magic and some offensive magic) and Combat Mage (the reverse of Nature Mage.) The Expansion Pack to Dungeon Siege II, Broken World, adds two more: Fist of Stone (combination of Fighter and Nature Mage) and Blood Assassin (combination of Ranger and Combat Mage.) You can also create a party of eight hireable NPCs (six in DS II,) offering more flexibility, plus a pack mule to carry all your extra stuff. Unusually, you do not control your characters directly in combat; you instruct them ahead of time, and set formations as they travel, and when enemies appear, they act according to their instructions, casting spells, fighting close in, healing allies, or whatever you've instructed, autonomously.

The first game takes place in the land of Aranna, specifically in the region of Ehb. You start the game as a humble farmer. Unfortunately, a normally passive race suddenly attacks your hometown. A dying friend of yours asks you to head over to the next town and seek help. However, it turns out the quest doesn't end there. As you gather up your forces and progress through Ehb, you find out that an ancient demonic race, the Seck (who once served under the tyrant Zaramoth the Unmaker, but that's expanded on in the second game) has returned to Aranna to seek revenge. It is up to you and your friends to destroy it and end the threat.

In 2003, an Expansion Pack was released: Dungeon Siege: Legends of Aranna, which offered a lot of new options for the player and his party (transformation spells, armor and weapon sets, a more combative pet, and new enemies to fight)

In August of 2005, a sequel hit the markets: Dungeon Siege II. It was greatly improved: the story was worked up, the world you travel through looks impressive, the hireable NPCs were very much fleshed out (they even got their own personal Side Quests, although the party size was reduced from eight to six,) and the character classes were given impressive powers to turn the tide of battle. Not only is the current story worked on, but the backstory was as well. A thousand years ago, Azunai the Defender clashed with the aforementioned Zaramoth. Both of their armies fought valiantly, but when the two warriors' personal armaments - the Shield of Azuna and the Sword of Zaramoth - clashed, the Endtime happened. The Age ended borderline-apocalyptically and a new one began. Many years later, a power-hungry prince named Valdis, the game's Big Bad, got a terrible fever and with it prophetic visions. When he recovered, he went to the ruins of Zaramoth's Horns. He found the tyrants sword (now a Sealed Evil in a Can) and became exactly what he wanted: a powerful tyrant bent on world domination. He even created an army of evil creatures called the Morden (an appropriate name, as "mord" is German word for "murder".) In a twist, you and your best friend Drevin start as mercenaries working for Valdis. Unfortunately, after you complete your first quest, things turn sour and you end up the prisoner of the people you were fighting: the Dryads. After a few quests to prove yourself, you form up a party and head back to your hometown of Aman'lu. Unfortunately, Valdis beats you to it, and the Archmage who serves him destroys it. Inspired to revenge, you and your party seek out Valdis and destroy him. Unfortunately, the game has a Downer Ending. Let's just say Nice Job Breaking It, Hero.

In 2006, another expansion set was added to the series: Dungeon Siege II: Broken World. It's a darker continuation of DS II and wraps up the story. An evil force - who is much worse than Valdis —has taken over Aranna in the aftermath of your Nice Job Breaking It, Hero moment, radically altering it and nearly killing all of its inhabitants. Don't worry, though; your friends have survived the Cataclysm and are ready to help you once again. Which is good because this time, It's Personal.

Dungeon Siege: Throne of Agony was released for PSP alongside Broken World and serves as a side story to the events of Broken World. Both Throne and BW featured crossover items, special items that could be unlocked across both games by either linking the PSP's MAC Address to the player's copy of Broken World, or by using passwords given by each game.

Uwe Boll made a movie of the first game, titled In The Name of the King: A Dungeon Siege Tale. With Burt Reynolds as the king. And, it must be noted, Ray Liotta as an evil sorcerer.

A sequel to the first two games, Dungeon Siege III, developed by Obsidian Entertainment, was released June 2011. It tells the story of four descendants of the 10th Legion: Lucas, Anjali, Katarina and Reinhart as they attempt to rebuild the Legion and defeat the woman who disbanded them in the first place.

The only Downloadable Content pack for DS III, Treasures of the Sun, was released October 25th, 2011.