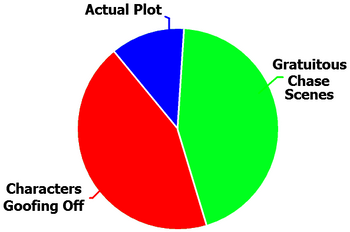 Captivating your audience, now with 20% more idle time.
"Oh! We'll make you a movie
That's long and immense,
Way-hey! Slow the plot down.
Just give us a script
That makes no friggin' sense —
We'll try so hard to slow the plot down!"
— Joel and the Bots, "Slow the Plot Down", Mystery Science Theater 3000
Advertisement:

Padding is a moment in a story which could have easily been removed from the plot without affecting the story significantly.

Most works have to employ some level of this to get to the desired length/running time, but are usually either subtle about it or manage to make the padding itself enjoyable. In other cases, these scenes distract from the plot advancement.

This is more easily identifiable in television shows, when a scene is obvious padding to get the episode up to sufficient length, sometimes involving the use of Stock Footage, which allows the producers to pad multiple episodes with a scene they only have to pay to shoot once. In anime this can be easily identified in works adapted from a manga: if a scene wasn't in the original work, it's almost certainly padding. Shonen works especially like to extend existing fight sequences, or add entirely new ones with moves only used in that scene (which don't affect the outcome of the fight, of course, they have a manga to follow!). Both types of work are influenced by having to hit a runtime that can be aired in a defined timeslot, but digital-only works such as The Mandalorian don't have to adhere to this and thus are only as long as they want to be.

In film, it's often entirely a matter of opinion; for instance, many people wonder why the movie Fargo wasted time showing the detective's husband fixing her breakfast when there was a compelling Reverse Whodunnit in the works, whereas the movie's most ardent fans feel that such scenes were the whole point. Padding is also easier to get away with in comedic works, where one can get away with adding extra, unncessary scenes as long as they're funny enough. The Overly Long Gag trope is frequently used as this, with the most famous example being the rake scene

All the same, there are some unquestionable and painful moments of padding in films, especially from the 1950s. Roger Corman and Bert I. Gordon are often considered the kings of padding (both have even been credited with inventing the device, though such claims are apocryphal), inserting gratuitous scenes of mountain climbing or characters stumbling around in the dark in order to pad a film to feature-length. They were not even above simply doubling individual frames to add a few extra seconds. Mystery Science Theater 3000 treated this sort of time-filler as the most painful thing a movie could do (it was presented under the name "Deep Hurting" in Hercules Against the Moon Men, thanks to its drawn-out sandstorm sequence).

In comics, arcs that could be easily three or four issues long are usually padded out for the inevitable trade paperback collection. Usually, the default arc length is six issues, as that results in a $20 trade (the typical rate for such a book). This happens at both Marvel and DC, though the former was so notorious for it that it drove writers away from the company.

Games often send you on long fetch quests, sidequests, or just running back and forth and not progressing the story. This is commonly seen in Roleplaying Games and the more expansive of Action-Adventure games; although a lot of the content that is considered "padding" is optional. Forced Level-Grinding, however, isn't. For a First-Person Shooter game, you'll be required to go back and forth or repeat the same levels over and over again, without Chaos Architecture making it seem different or at least getting to go to new areas. In an adventure game, which naturally is much shorter than the average Roleplaying Game or most First-Person Shooter games (especially if you know what to do), they will pad it by making you go back and forth or making an overly-long puzzle or dialogue branch. Other examples would include Pixel Hunting or sending you on a long series of errands/puzzles that merely give you one item to progress the story. And if they can't think of a way to do even that, they just might cause enemies to regenerate (in a first-person shooter) or keep endlessly entering the frame as clones of themselves (in a side-scroller) so that you have to eat up time just killing people!

Padding is often frequently present in music, too. It can range from parts without the main melody or sudden stop periods. Examples are quite subjective. BUT!!! Despite the name, Padding has not even a smidgen to do with diapers.

Should not be confused with Padded Sumo Gameplay, but the video game version of Padding is Fake Longevity.