Film / Hercules Against the Moon Men 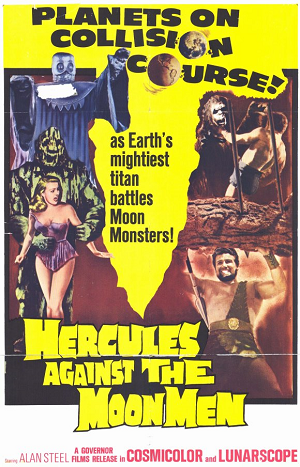 Hercules Against the Moon Men is a 1964 Sword & Sandal movie. The movie, like Colossus and the Headhunters, isn't actually a Hercules movie but a Maciste movie, with the name changed for US release.

Somewhere in the ancient Mediterranean world, a ship from the Moon crashes into a mountain, and the occupants insist on getting human sacrifices at what is now the "mountain of death". Enter our hero, "Hercules," played by Alan Steel. Hercules helps free the sacrificial victims, but the Queen of Samar is in league with the Moon Men now, and sends her armies out to stop Hercules. Swordfights and buffalo shots ensue. Then, the Moon Men reveal their master plan to revive their dead queen and merge the Moon with the Earth. Can the Herc get to the mountain in time to save the girl and the world?

Hercules Against The Moon Men provides examples of the following tropes: