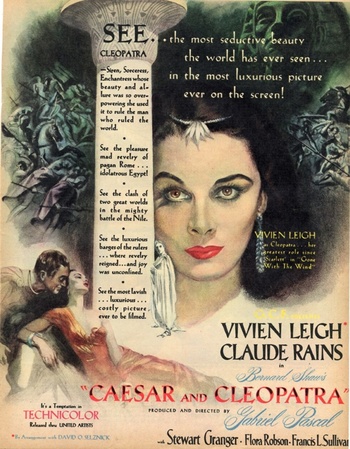 Caesar and Cleopatra is a 1945 British Technicolor Sword & Sandal film directed by Gabriel Pascal and starring Claude Rains as Julius Caesar, Vivien Leigh as Cleopatra VII and Stewart Granger as Apollodorus the Sicilian

. Some scenes were directed by Brian Desmond Hurst, who remained uncredited. It is an adaptation of the play Caesar and Cleopatra by George Bernard Shaw, who collaborated closely with the production.

Julius Caesar takes possession of the Egyptian capital city of Alexandria, and tries to resolve a feud between young Princess Cleopatra and her younger brother, Ptolemy XIII. During the resulting sometimes-murderous court intrigues, Caesar develops a special relationship with Cleopatra, and teaches her how to use her royal power.

Caesar and Cleopatra provides examples of: