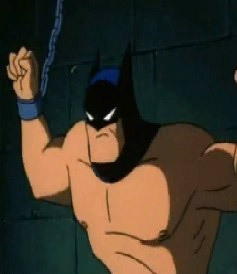 A captive Batman relieved of his shirt by Ra's al Ghul.
Advertisement:

Inexplicably, captors often find it necessary to relieve male prisoners of their shirts and characters whose regular attire requires them to be shirtless are often imprisoned, chained, shackled or otherwise restrained. There's some question as to whether this phenomenon is due to the need to prevent them from hiding a means of escape, a form of humiliation or punishment, to make them more vulnerable to the whip or whatever else they want to do to the guy, or if the captors enjoy providing fanservice or maybe something else entirely. Or, alternatively, Villainesses Want Heroes. Of course, it's also pragmatic if Clothes Make the Superman.

This is almost entirely a male character trope for obvious reasons. Compare Go-Go Enslavement, and Shameful Strip, of which it can be a subtrope. See also Barefoot Captives for the other end of the body (though the captive could end up both shirtless and barefoot).

It can be a prelude to, if not an integral part of: Working on the Chain Gang, Made a Slave, Slave Galley, and Gladiator Games.

A staple of Sword and Sandal films.