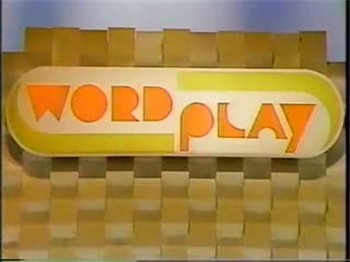 "Does Dick Shawn clean his acumen once a year?
Has Dorothy Lyman ever found a hoodoo hiding in her garage?
If Richard Moll acted avuncular, would a lady slap his face?
We'll find out the answers to these questions and a lot more as we play America's funniest new game show, Wordplay!"
— Charlie O'Donnell's opening spiel from Wordplay's debut episode
Advertisement:

Wordplay was a short-lived Game Show that aired on NBC from December 1986 to September 1987, and ended up being Tom Kennedy's final show. It was produced by Fiedler/Berlin Productions (who would later go on to produce Treasure Mall, Trump Card and Wink Martindale's Trivial Pursuit) and Scotti-Vinnedge Television (best known for producing America's Top 10).

Two players competed to identify the definitions to obscure words (all certified as words by Webster's Dictionary) with the aid of a three-celebrity panel. The game board had nine different words, each worth an amount of money (how much depended on the round and how the game progressed- we'll get to that in a moment). When asked to identify a word, the celeb would give humorous stories, and three different definitions; if the contestant in control picked the right one, they won the money the word was worth. Here, a layer of strategy came in- with each successive word, the words on the board would be connected and therefore offer more money, but an incorrect choice gave the opponent a chance to choose from the remaining definitions. If the word chosen was connected to previously revealed dollar amounts, the contestant won the combined total of all connected money amounts; if both contestants chose a wrong definition, a block went up and all connections to it were dead. Whoever managed to get more money by the end of the game won and moved on to the "Double Definition" endgame.

Not to be confused with the 2006 documentary film about crossword puzzles.

Game show tropes in use:

Other tropes in use: