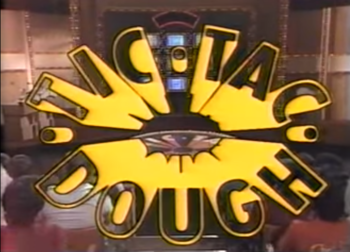 From Hollywood, it's everybody's game of strategy, knowledge and fun! It's Tic-Tac-Dough!
—Opening Narration
Advertisement:

NBC knowledge-based Game Show from Jack Barry and Dan Enright which was based on the children's game of Tic-Tac-Toe. Two contestants placed their X's and O's on a game board with nine categories, which were shuffled by a mechanical device after every turn. Each correct question would add money to a pot; whoever managed to get three-in-a-row won the match and the pot.

The original series debuted on July 30, 1956, with Barry as quizmaster, although sources differ regarding Gene Rayburn: Some state that he only hosted on Fridays until February 1957 (at which point he left), while others claim he replaced Barry sometime after April 3, 1958.

Regardless, a nighttime version began in September 1957 with Jay Jackson as emcee; however, this run was rigged about three-quarters of the time. October 1958 saw both versions change hosts, likely due to the erupting scandals — Jackson was replaced by Win Elliott on October 2, with the daytime emcee being replaced by Bill Wendell four days later. The nighttime show was canned on December 29 of that year, followed by the daytime series on October 23, 1959.

A daytime revival with Wink Martindale aired briefly on CBS from July 3 to September 1, 1978. This time, the game board comprised nine TV screens connected to an Altair 8080, with nine AppleII computers as display slaves. The show also had a Bonus Round with a Dragon. Tic-Tac moved to syndication through Colbert Television Sales, still with Martindale as host, two weeks after the CBS run ended. In many markets, the show was often seen as part of a 60 minute block alongside fellow Barry & Enright program The Joker's Wild.

In 1985, Martindale left the series to produce and host the syndicated Headline Chasers, a show he also created. For the final season of this run (1985-86), the woodgrain set was replaced with a pastel-clad set, the logo seen above changed from yellow to blue coloring, more red boxes were added to the game, and Jim Caldwell became emcee.

September 10, 1990 saw the debut of another syndicated revival, this time hosted by Patrick Wayne (John Wayne's son) and with ITC Entertainment replacing Colbert Television Sales as distributor. This iteration, featuring several changes that were roundly disliked, was canned on December 7 after just 13 weeks (although repeats aired through March 8, 1991). Another version was announced in 2021 with host Tom Bergeron and executive producers Harry Friedman and Village Roadshow Television.

note The original title (and for that matter, the pun) would have been meaningless for UK viewers, as tic-tac-toe is called noughts and crosses there. ran on ITV from 1957-67.