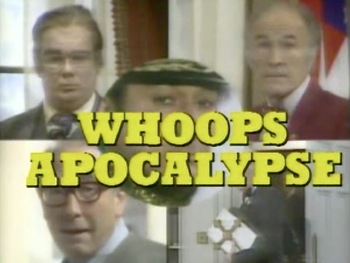 Wear your mushroom with pride.
Advertisement:

Whoops Apocalypse is a six-part 1982 British television sitcom by Andrew Marshall and David Renwick, made by London Weekend Television for ITV. Marshall and Renwick later reworked the concept as a 1986 film of the same name from ITC Entertainment, with almost completely different characters and plot (although one or two of the original actors returned in different roles).

Our main characters are:

Tropes used in the show include: