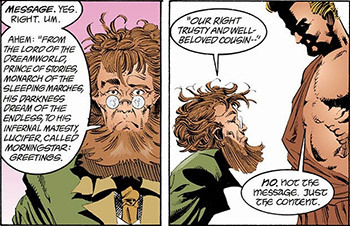 Some people can't just say "hello" and leave it at that. These people are the ones who belong to this trope: They cannot give a simple greeting, salutation or announcement. Instead, protocol or cultural mores from their city, state, dimension, planet, or other point of origin, or even a self-imposed code of conduct, require a lengthy greeting far longer than local etiquette requires.

The greeter may fall over exhausted after the greeting; or those they are greeting may do so.

May overlap with Try to Fit That on a Business Card or Large Ham Title. See also Long List, Secret Handshake, and Fictional Greetings and Farewells. In pre-modern or medieval fantasy settings this frequently overlaps with Verbal Business Card since the greeting may include useful information about the person's identity (rank in society, past accomplishments etc). If one specific person greets people or is greeted in this manner, see catchphrase and Phrase Catcher respectively.

Being able to memorize (or even more impressively, extemporize) these kinds of greetings is the chief skill of a Hammy Herald.