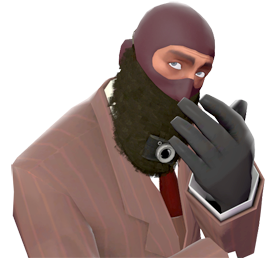 "You wouldn't mind if I read this top secret document with my beard, would you?"
Q: How do you know that the secret police have bugged your apartment?
A: There's a new cabinet in it and a generator running outside.
— East German joke

Listening devices and "hidden" cameras that are large and obvious, often with a big red or green light on them, that go unnoticed. Sometimes they get hidden in ventilation grates in such a way that the light they emit can be seen by anyone walking by. And sometimes they're right out in the open, apparently unnoticed by people who really ought to know better.

Tracking devices are even worse for this, not only having a red light, but beeping audibly, which is several kinds of stupid. One would think that Batman of all people would realize that perhaps it's not a good idea to stick a beeping, light-equipped device onto somebody's car and expect them not to notice.

Still played straight on occasion, just as often it's subverted or parodied. Such variants include:

Sometimes the bug itself isn't obvious, but is discovered because it allows two-way communication for some reason.

The reason this trope is used is for the audience's benefit. Bugs in television are big and obvious so the director can point the camera at the bug to tell the audience that a bug has been planted on that person without wasting dialog telling the audience.

Not to be confused with the things you find in Obvious Betas. Or with actual insects (usually).

Dr. Klahn has built a listening array of extraordinary magnitude.

Dr. Klahn has built a listening array of extraordinary magnitude.