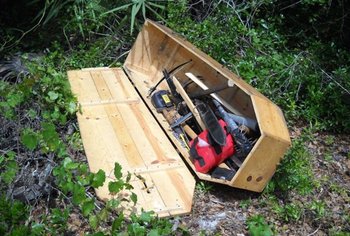 Coffins make handy places to store items other than corpses. After all, most people are a trifle squeamish about opening something that might contain a dead body. This trope is a when a coffin, sarcophagus or other container intended for human remains is used to conceal something else.

Not to Be Confused with hiding the corpse's own belongings with him/her.