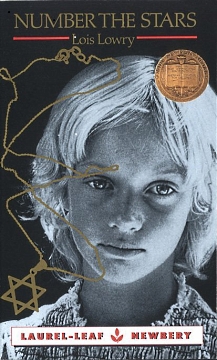 Number the Stars is a Historical Fiction children's novel by Lois Lowry.

The novel is about a Danish girl named Annemarie Johansen and her Jewish friend Ellen Rosen. They live in Copenhagen, Denmark during World War II. They are forced to move out into Annemarie's Uncle Henrik's home after Nazi soldiers demand to know the whereabouts of Ellen's Jewish family. Ellen, now disguised as Annemarie's dead sister Lise, joins the Johansen family in Uncle Henrik's home. Annemarie has to face her fears in order to save her friend.

It received the John Newbery Medal in 1990.