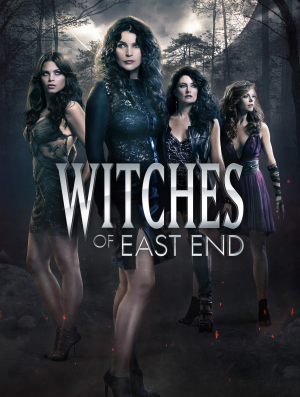 Witches Of East End is a 2013 Feminist Fantasy / Supernatural drama series on the Lifetime Network based on the book of the same name by Melissa De La Cruz.
Advertisement:

Joanna Beauchamp (Julia Ormond) is your average middle-aged art teacher, a single mother with two grown daughters, Ingrid (Rachel Boston) and Freya (Jenna Dewan). Except that she is immortal, her estranged sister Wendy (Mädchen Amick) can turn into a cat and has nine lives, and Ingrid and Freya have died and been reborn multiple times over the past few centuries – and all four of them are secretly witches.

After growing tired of constantly seeing her daughters be killed by their own magic, Joanna has decided to raise Ingrid and Freya without knowledge of their witchcraft to hopefully see them live past 30 this time. But when a shapeshifter who looks exactly like Joanna targets their whole family, Wendy convinces her that they can't hide Ingrid and Freya's heritage from them anymore.