Film / The Trip Across Paris 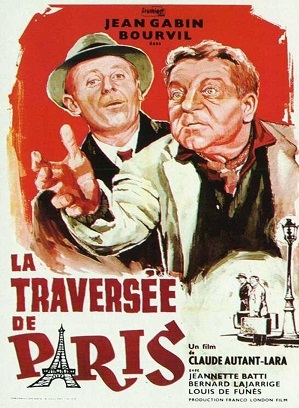 La Traversée de Paris (The trip across Paris) is a 1956 French film directed by Claude Autant-Lara and written by Jean Aurenche, Pierre Bost and Michel Audiard. It stars Bourvil, Jean Gabin and Louis de Funès, and is based on the short story La traversée de Paris by Marcel Aymé.

The film is set in Paris in 1942, during the German Occupation. Two men, Marcel Martin (Bourvil), a former taxi driver, and Grandgil (Gabin), a painter, defy the curfew to deliver an important load of pork meat across the city by foot in the dead of the night, on behalf of Black Market grocer Monsieur Jambier (De Funès).

The film competed at the 17th Venice International Film Festival, where Bourvil won the Volpi Cup for Best Actor. The cynical portrayal of the Occupation was very unconventional for the time and made the film controversial upon initial release a mere decade after the war.

The trip across Paris provides examples of: