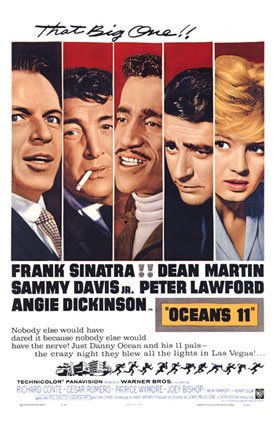 "Why waste those cute little tricks that the Army taught us just because it's sort of peaceful now?"
— Danny Ocean

Ocean's 11 is a 1960 heist film which brought five members of the Rat Pack together as well as a mess of other popular actors for a romp around Las Vegas.

Danny Ocean and Jimmy Foster bring together a group of World War II 82nd Airborne veterans for the purposes of robbing five Las Vegas Casinos at midnight on New Year's Eve. They plan to knock out the city electricity towers, and rewire the casinos' automatic backup generators so that they will open instead of close the safes. Team members disguised as bellhops and waiters will then sneak out the money under cover of darkness before anyone knows what's happening. The highly trained team has nothing to fear... Until Foster's father-in-law to be, former gangster Duke Santos, shows up in Sin City on the eve of the heist.

Most of you are probably more familiar with the 2001 remake and its sequels.