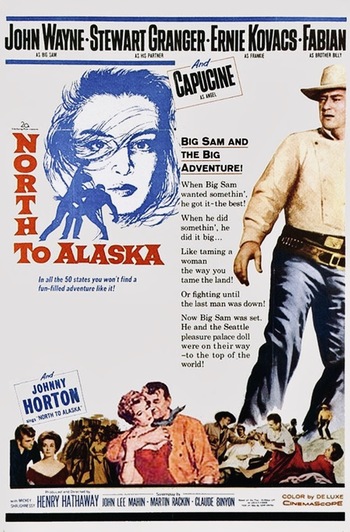 North to Alaska is a 1960 comedic Western directed by Henry Hathaway and John Wayne. It stars Wayne along with Stewart Granger, Ernie Kovacs, Fabian, and Capucine.

After finding gold in Alaska, George Pratt (Granger) sends his partner Sam McCord (Wayne) to Seattle to bring back his fiancée, a French girl named Jenny. Sam arrives laden with gifts and explanations only to discover Jenny has married another man.

Sam, not knowing what else to do, goes to a place called the Hen House to console himself. There he runs into a feisty prostitute called "Angel" (Capucine), whose accent gives him the crazy idea that another French girl would make a fine substitute (alcohol was involved). Angel, who thinks Sam's friend is all talk, goes along with the plan for a while only to quickly fall in love with Sam's genuine and honorable nature — something she isn't used to.

No sooner are they on the boat than everything backfires, as Sam realizes his crazy scheme is crazy and Angel realizes that Sam's friend isn't all talk. Quietly heartbroken and frustrated, Angel decides to treat Sam in kind by frustrating him, and the first item on the agenda is not going back to Seattle like they discussed. Not that Sam knows; as far as he's aware, Angel's just decided to take him up on his offer.

An angry and heartbroken George rejects Angel outright before eventually coming around to her charms, though his younger brother Billy (Fabian) is infatuated with her from the start. But once he realizes that she's fallen for Sam, George does everything in his power to help them by coaxing his partner, up to and including staging a fake romance for Sam's "benefit".

Meanwhile, local con man Frankie Cannon (Kovacs) finagles his way into saloon ownership, the boys' gold mine, and Angel's association. This culminates in a scam that allows Cannon to seize the gold mine by using his illiterate drunkard janitor, which leads the group to fight Cannon's scam in court, which naturally ends with an all-out brawl in the town's muddy streets. Once the gold is secure, Angel at first decides to leave, but Sam — who finally tells her how he really feels — and eventually the entire town convince her to stay.