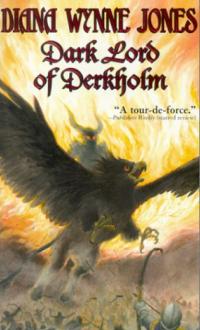 A Young Adult fantasy novel by Diana Wynne Jones, set in the world described in her meta-fictional book The Tough Guide to Fantasyland. Except Fantasy Land is not quite what you'd expect; it is not, in fact, a perpetually medieval world of Black-and-White Morality, but is instead ruled with an iron fist by Mr Chesney, a businessman who runs tours for very rich people from our world.

After years of oppression, the various rulers, high priests and wizards of the world get together to decide what to do, and visit the two oracles, where they learn that they must appoint the next two people they see as Dark Lord and Wizard Guide for the upcoming tour in order to be rid of Mr Chesney forever.

Unfortunately, though, the next two people they see are the Wizard Derk, who is middle-aged, friendly, and very good at what he does (which happens to be blending genetic engineering with magic to create hybrid animals), and his fourteen-year-old son, Blade.

It has a sequel called Year of the Griffin, which, in typical Wynne Jones style, is a little disconnected from the original. It follows one of Derk's children, Elda, as she attends university for the first time.

Tropes featured in both works include:

Tropes featured in Dark Lord of Derkholm include:

Tropes featured in Year of the Griffin include:

Alternative Title(s): Year Of The Griffin