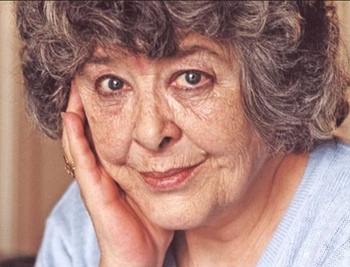 "I start out with people very often. Also some very, very clear scenes from the middle of the book. And usually a notion of how it’s going to go in the end, but that isn’t always the case. But it’s the clear picture from the middle that’s the important bit, I think.
(On being asked how she starts writing a new work)
Advertisement:

Diana Wynne Jones (16 August 1934 – 26 March 2011) was a British author of fantasy, mostly of the Young Adult variety. Noted for her intricate plotting with frequent uses of The Plan, high-energy dialogue, and relentlessly British wit. She is probably best known for Howl's Moving Castle (which was turned into a very successful animated movie by Hayao Miyazaki), and her Chrestomanci series, but she has an extensive catalog of novels and short stories.

She was diagnosed with cancer but decided to stop chemotherapy in 2010, and died in March 2011. But her career still wasn't quite over, as in 2013 another of her manuscripts was discovered, and prepared for publication.

There is of course a Diana Wynne Jones wiki

Adaptations based on her works: