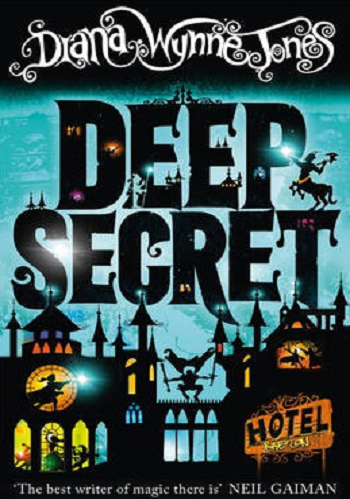 The Koryfonic Empire sits in the center of the multiverse. That is because the multiverse itself is shaped as an infinity sign, with the Koryfonic headquarters on the center of it all, its empire ruling across several worlds with an iron fist. Its domains include both sides of the multiverse. One side is "Ayewards", in which magic is common practice and easy to do, while the other is "Naywards", the worlds in which magic is nothing more than superstition, if not completely unknown. Our Earth is currently on the Naywards side, and seems to have been sliding back for a while.

Keeping watch over the balance of magic, a group of persons of great power called the Magids have a great number of agents on each one of the worlds, Ayewards and Naywards alike. One of the Magids from Earth, Stan, passes away. His successor Rupert Venables needs to find a successor himself to replace his late mentor. Among them he finds a great prospect on the person of Maree Mallory; however, he is horrified to find that she doesn't seem to be ethical enough for the Magid job, and all other candidates are on different parts of the globe. Looking for a way to contact them all, he meddles with the fates of each one to get them all together at a Fantasy Convention at Hotel Babylon near where he lives, but they are not the only ones to show up.

Not being in enough trouble, Rupert is also suddenly called to the Koryfonic Empire. A terrorist attack blows up the palace and kills the Emperor and most higher-ups, and odd customs make finding the heirs very hard, what with most of them already being dead and the others protected by a very secure system. Rupert gets his hands full with both jobs as he searches for the missing heirs and searches for a Magid successor, and things start getting out of hand quickly.

The book has a lot of tense situations while still poking fun at its own nature and, of course, at fantasy conventions themselves. It also is, unlike many of Jones's novels, written for adults and has no qualms on mentioning sex and featuring horror.

Deep Secret was followed by The Merlin Conspiracy, featuring the further adventures of Maree's cousin Nick. The second book is somewhat tamer than the first and can be enjoyed without having read the first, though some backstory may be missed. It is also less definitely aimed at young adults; this is part of the reason it was not advertised as a sequel.

Tropes appearing in Deep Secret include: