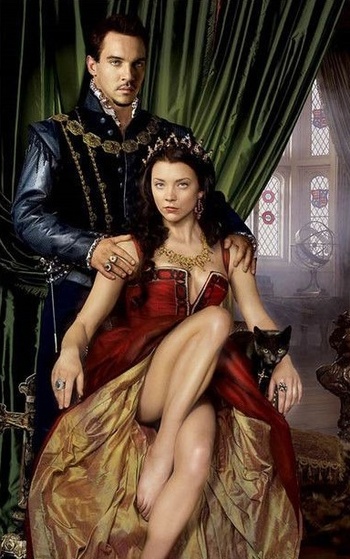 When she is your wife, it certainly is "good to be the king".
"She's the kind of woman you'd expect to see as the beautiful consort to the corrupt generalissimo of a collapsing Third World country."
— Good Omens, on War
Advertisement:

Power Is Sexy. But nothing says the sexy part has to be one-sided.

When you rule a country, you have a choice of anyone you want to be your spouse. Not to mention that if power tends to corrupt, alongside being sexy, then women are often attracted to such corruption anyway. Must be married to them, or something close enough for tax purposes. Also applies to elected Presidents, powerful Prime Ministers, and all-round tyrants.

Note: Being hot is not a guarantee against the husband having a mistress.

Truth in Television — though not nearly as common as one may think because most royal marriages were arranged dynasty marriages where the bride was from another country rather than the ruler's subjects and her family mattered more than her looks. Still, it was not unheard of, with many princesses being genuinely hot (or at least with much more resources to pour into their good looks) and sometimes a concubine or a mistress (who was picked for her looks) ascending to consort or even ruler status. In a few cases, the ruler even held an actual Beauty Contest to pick themselves a wife!