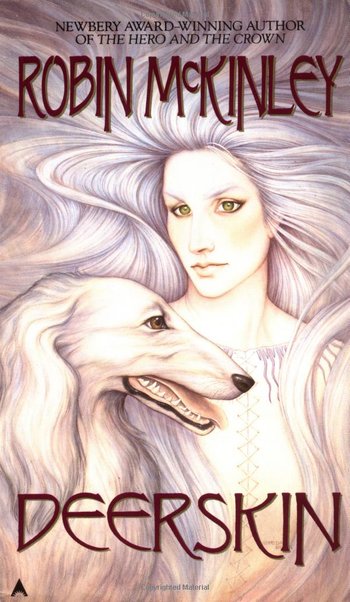 Deerskin is a novel by Britain-based author Robin McKinley. It's a Grimmification of the Perrault fairy tale Donkeyskin, in which a king, who had been married to the most beautiful woman in the world (or in the book, the most beautiful woman in seven kingdoms) promises his dying wife he will not remarry any woman who isn't as beautiful as she was. Of course through the years he never finds one, until their only child, a daughter, grows up to be the spitting image of her mother and thus draws her father's... attention.

Deerskin takes it up to eleven in grimness factor—the princess is shown as completely neglected long before her mother dies, the entire kingdom far too fixated on her beautiful, beloved, but fundamentally shallow parents. Neither parent even takes any notice of her until her mother dies, and her father looks at her in a way she can't interpret but really doesn't like. She spends the next two years largely hiding from him, until, the day after her seventeenth birthday, he announces his intention to marry her. Naturally she's as horrified as the rest of the court, but since the court can't bring themselves to think the King is wrong, they blame it on her.

She locks herself in her rooms, but after three nights her father breaks in and rapes her, leaving her unconscious, horribly injured, and as she will later find out, pregnant.

The rest of the story is a somewhat unsettling chronicle of her life in the wake of that—for months she can't remember anything much beyond her own name and that of her dog. She runs away into the woods and eventually finds a cabin where she passes the winter, subsisting on largely rotten food, hardly able to walk and unable to fully use one of her arms. A Convenient Miscarriage (wholly justified, considering she was half-starved and badly injured) temporarily brings back her memories, but a being called the Moonwoman takes them from her until she's strong enough to face them again.

Though it takes place in a fantasy setting, it's an at times gruelingly realistic portrayal of sexual abuse and its after-effects. One of McKinley's most adult books, it's definitely not one anyone younger than their mid-teens should probably be reading, unless they want to be traumatized.