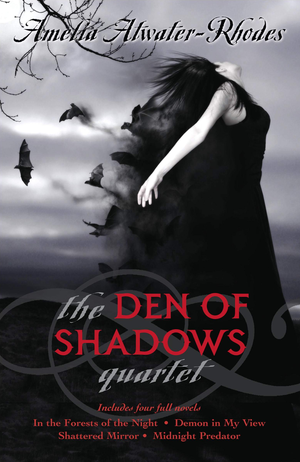 Den of Shadows (also known as Nyeusigrube) is a series of vampire/shapeshifter/witch books written by Amelia Atwater-Rhodes. Although there are small crossovers among books, all of the books are stand-alone novels (with the exception of Shattered Mirror and All Just Glass). Atwater-Rhodes wrote the first book, In the Forests of the Night, when she was only 13, and published it when she was 15.

The first books were published between 1999 and 2002. After Midnight Predator, Atwater-Rhodes took a break to write the Kiesha'ra series, but returned to Den of Shadows in 2008 with the release of Persistence of Memory. Following the release of Promises to Keep, Atwater-Rhodes announced that the series had officially ended, but that she would continue to write books set in Nyeusigrube.

These books take place in the same universe as the Kiesha'ra and Maeva'Ra series, albeit several thousand years later.