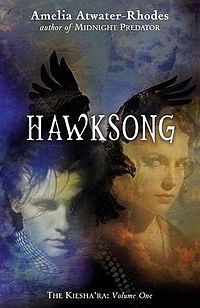 The Kiesha'ra by Amelia Atwater-Rhodes is a five book, young adult fantasy series about the war between avian and serpiente shapeshifters. Each book has a different narrator; other kinds of shapeshifters become important in the series as well. It takes place a few thousand years before the events of the Den of Shadows series.