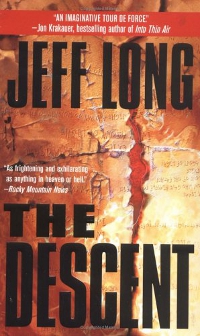 What if Hell was an actual place on Earth?
Advertisement:

The Descent is a 1999 science-fiction/horror novel by American author Jeff Long focusing on the discovery and exploration of an extensive labyrinth of tunnels and passages stretching throughout the sub-surface of the entire world, inhabited by several species of alternately-evolved troglobitic hominids who have adapted to their underground condition. While presently degenerate and brutal, the "hadals" had once possessed a high level of civilization, having reached the Iron Age as far back as 20,000 years ago and mentored subsequent human civilizations. Their fall from grace formed the basis of the historical belief in demons.

The book is split between two storylines. The first concerns an ill-fated expedition into the sub-planet. The other about the Beowulf Club, a group of highly-determined scholars who set out to find the historical figure who inspired the legends of The Devil. Eventually, these two stories intersect as the expedition comes face-to-face with Satan himself.

Has nothing to do with the video game series Descent. Nor the 2005 British horror film The Descent written and directed by Neil Marshall, although there are certainly similarities. The novel was followed by a sequel, Deeper.

The Descent contains examples of: