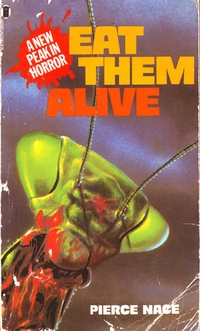 His thirst for revenge was unquenchable until he stumbled on the terrifying monsters of Malpelo Island.
— Cover Blurb
Let me go! Don't kill me! Don't eat me any more!
— Mona Stuart
Advertisement:

Eat Them Alive is a 1977 horror novel written by the otherwise anonymous Pierce Nacenote The author was in fact eventually revealed to be Kansas native Evelyn Pierce Nace, wife of insurer Otis Nace, who wrote under her maiden name and married name as a pseudonym, because horror novels were mostly written by men at the time. The story is simple. Dyke Mellis is an ex-con who is a member of a gang in Texas consisting of Kane Garrister, Ryan Gaut, Pete Stuart and Zeb Hillburn. One day the crooks hit the big time when they net $2 million in cash from an old man after they torture him to death.

Dyke decides to take all of the money for himself, but fails and is captured. His gang beat him within an inch of his life. In particular, they castrate him. After surviving the attack, he escapes to South America and ends up living on Malpelo Island off of Colombia. Here he discovers a race of gigantic praying mantises who he trains to kill and eat people, and, of course, uses them to exact vengeance upon his former partners in crime. And pretty much everyone else unfortunate enough to stumble across him.

That's the plot, such as it is. What Pierce Nace's novel is remembered for though are its shocking levels of violence and depravity. Although there are plenty of nastier books out there, Eat Them Alive is renowned amongst "gorehounds" for being nothing but violent death after violent death, with many victims' demises taking several pages to describe. Nace does this to the point of actually making intestinal ravaging and throat-ripping at the mandibles of giant praying mantises repetitive. Clearly, what the novel lacks in substance it makes up for in sheer quantity.

Have lots of Brain Bleach ready for when, and if, you read this.

It was reprinted in 2019 in a German language edition by Festa Verlag in Leipzig. It remains out of print in English-speaking countries.