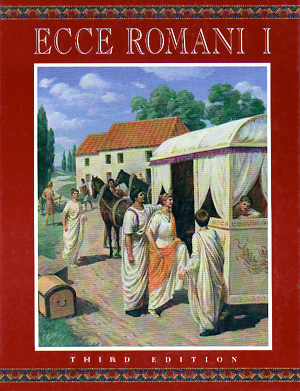 Ecce Romaninote "Look, Romans!" or "Behold, Romans!" is a series of Latin textbooks for high school students, teaching through stories, first published in 1971. The first two books follow the story of the Cornelius family, a family of Romans circa A.D. 80. The family includes Gaius, the father and a wealthy senator; Aurelia, his wife; Marcus and Cornelia, their children, and Sextus, who is not related, but whose widowed father is a good friend of Gaius, who in turn, is looking after Sextus while he stays in Asia. Other major characters are Davus, Cornelius's head slave and farm overseer, and Eucleides, the stereotypical ancient-Greek and slave-paedagogus of Marcus and Sextus. Oh, and Flavia, too.

The plot of the first book involves the Cornelius family returning to the city of Rome after Gaius gets recalled by the emperor to the Senate, and the second follows the things that happen to them there. The third book uses actual ancient Latin writings, so the plot ends at the end of the second book, which has a few pages (in English) describing what happens to the family.

The above description refers to the later US editions by Prentice Hall, which were published first in 2005. The series was originally published in 1971 by Oliver & Boyd of Edinburgh, Scotland, and was significantly different. It had six books, simple line-art illustrations, and some differences in the plot, though in the absence of the opportunity to directly compare Scottish and US editions it is not possible to be more specific. British schools, naturally, use the Scottish version.

Not to be confused with The Cambridge Latin Course, the equivalent Latin textbook in the UK.