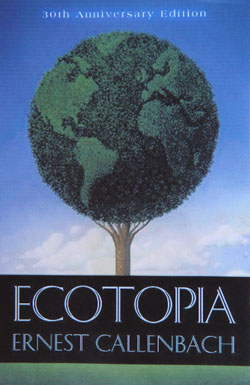 Imagine a future that works!
Authored by Ernest Callenbach in 1975 and set 20 Minutes into the Future.
Advertisement:

We are in the year 1999. Since 1980, Ecotopia has been isolated, Chinese fashion. Now, finally, an official visitor is admitted. He is Will Weston, crack investigative reporter. Like a modern Gulliver, Will is sometimes horrified, sometimes overwhelmed by strange practices and sensual encounters. He discovers a nation which, in lucky circumstances, has taken charge of its own biological destiny. As Will becomes deeply involved with a sexually forthright Ecotopian woman, ritual war games and a female-dominated "stable-state" government, his confusion of values intensifies and reaches a startling climax. The novel of your future.