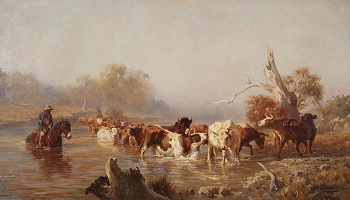 A common plotline for a Western is the cattle drive.

Ranches raise cattle, but then they need to get them to market. Usually the target is a town along the railroad, but occasionally the destination is somewhere else. A Western based on a cattle drive is more likely to star plain old Working cowboys as the stars, rather than using them as scenery.

In real life, these were among the great risks to a ranch. They need to transport the cattle to make money, but if something goes wrong they could lose everything. Dangers include a stampede, rustlers, snakes, storms, flash floods, drought, etc. These days it's done to impress tourists; real ranchers use trucks.

, though less so in the United States than elsewhere.