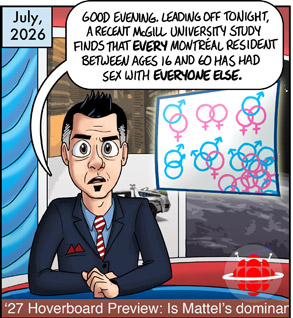 And then you realize this also means every family member.
Crossing through into a fuckin worm hole beyond the Milky Way
Thaaaaaaat shit's farrrrrrrrr
To a time of Earth so far in the future where everyone gets laid
Twiiiiiiice as haaaaaard!
—Ninja Sex Party, 6969
Advertisement:

In some branches of sci-fi, a major aspect of the Utopia — or, in some cases, a Dystopia — is the decline of monogamy.

Or, to put it bluntly, everyone sleeps with everyone and has a right to do so.

There is no longer any social stigma attached to promiscuity. In fact, the few who are strictly monogamous, or virgins/celibate are likely to be the ones who get weird looks. No-strings-attached sex may be seen as a great way of getting to know people, a good method of recreation, a good method of resolving conflicts and keeping the peace or, alternatively, it may be suggested that it's a biological imperative to have children by as many people as possible (a popular concept when the resident population is limited — such as colonies or After the End events). The attitude to sex may vary from a cheerfully accepted part of life ("Hey, I'm bored. Wanna test the bedsprings?") to a pragmatic one ("Damn, the kid I had with George turned out to be Ax-Crazy. Better have the next one with John."). No-one really cares who you sleep with either — any and all partners are acceptable. Expect a lot of polyamorous relationships, that is, full-spectrum friend and lover relationships in which intimacy is part of the mutual trust, but exclusivity is outside the defined commitment. Often involves an Everyone Is Bi society.

Occasionally, Fridge Logic will creep in. Contraception and sexual protection are rarely mentioned, and as any government information advert is quick to tell you, if you're sleeping with more than one person you better demand a full medical certificate from every partner or take the appropriate precautions. This might be explained by the author if they claim that this has been specifically enabled by science wiping out STDs and developing foolproof, convenient stealth contraception that everyone in the population uses.

Less easy to Hand Wave, though, is the one issue technology isn't likely to fix: jealousy. In the present day, many people would take a very dim view of their partner sleeping with one other person, never mind having sex with anyone who took their fancy. Idealistic views of love often include ideas of one, single soul mate. Conversely, in its more negative incarnations, love is commonly associated with jealousy (or even, possession). While a few stories will make a real attempt at explaining the decline of jealousy (since we already acknowledge it as one of the more negative emotions), a more common tactic is to demonise or mock anyone who expects a partner to be exclusive to them. They will probably be regarded as backward, repressed or selfish in a Free-Love Future. They don't have to go Ax-Crazy or bunny-boiler to be labelled a jealous nutcase — even asking a partner to be faithful will probably be seen as a laughable expectation at best, and a selfish demand that infringes on the other person's rights at worst. It could, however, be explained as everyone being raised that way, and therefore most everyone not caring because it's been ingrained in them since birth. There are also the cases where sex is entirely separated from romance, allowing the characters to have a single soulmate, but considering that sleeping with someone else is perfectly normal because there's just no correlation between the two, from their point of view. On the other hand, works depicting a dystopian free-love society will emphasize depersonalization of sex.

Commonly, a Free-Love Society will socially legitimize extra-marital affairs, where you may be married to one person, but it's socially acceptable to explore other people.

Openly sexual societies are also frequently predicted to be the result of disassociation between sex and reproduction, for example, in a civilization that embraces Ectogenesis (gestation outside the body, as through artificial uteri) or selective breeding (in which cases contraception may be not only popular but mandatory) and sexually-transmitted diseases would be given the same regard as influenzas. Families as a standard child-rearing unit may or may not exist, and most likely would deviate from the "traditional" nuclear family; at the very least, coupled biological parents of children won't be expected to live together or with their children. Expect No Blood Ties to be commonplace, if not the norm. In this case, you might see a lot of Parents as People.

A Double Standard may sometimes be in operation, ensuring that one gender is sexually available for their entire lives while the other can only do so until they get married, whereupon they are expected to be faithful to their partner. Often interpreted as wish fulfillment or Author Appeal, especially if they remember The '60s.

See also Eternal Sexual Freedom for when this is applied to real past societies, and Fetish-Fuel Future for the more general trope of "in the future, everyone will share/accept my personal sexual kinks" Author Appeal. This trope is also the logical future extension of the Everybody Has Lots of Sex setting. May involve or allow Exotic Extended Marriage. Contrast with No Sex Allowed.

Became popular as part of New Wave Science Fiction in the 1960s. While not a Discredited Trope, per se, it tends to have varying levels of popularity. It definitely fell out of favor during The '80s and The '90s due to the widespread concern of the AIDS epidemic. In The New '10s, it began to creep back into science fiction. However, this time it was in a more restrained manner. "Free Love" also became more defined as being free to be whatever orientation that you chose to be as long as it was consensual, legal, and not pedophilia or interest in the underage. Nowadays, while almost anything goes, meaningful and monogamous relationships are still considered important to a large extent and science fiction reflects this more than the free-wheeling attitudes of those past decades. While one night stands and no-strings-attached sex is common, it is still not widely considered wholly respectable for either gender.

One may notice from the description that neither "Free" nor "Love" truly define the trope. "Free Love Future" may entail mandatory sex without love.

Alternative Title(s): We Will Have Sex In The Future