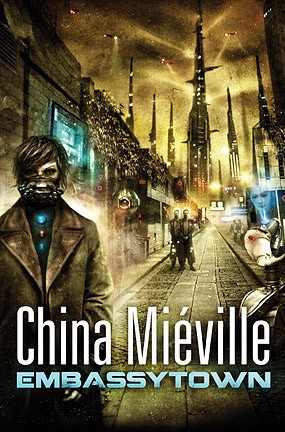 Embassytown is a 2011 novel by China Miéville. Superficially a sort of New Weird twist on the 19th-century colonial tale of discovery, the novel is actually an extended exercise in Fun with Foreign Languages.

Designated Hero, narrator, and pioneer Avice Benner Cho was born in the colony of Embassytown, on the planet Arieka, located at the very edges of the known universe. There, humans live alongside profoundly weird aliens called the Ariekei (or "Hosts"), who are noteworthy for their baffling language known as Language. By some unspecified mechanism, Language can only be understood by the Ariekei if it is spoken by two speakers who share one mind. As such, only genetically-engineered identical twins known as Ambassadors can communicate directly with the aliens.

After leaving home to become an interdimensional explorer, Avice reluctantly returns to Embassytown with her linguist husband, who wishes to study Language. During their stay, the status quo is thrown into disarray by an arrival from the colony's parent nation, threatening to destroy both the human and alien communities.